We had a “first” yesterday as Mike went to the city. He was walking when a man approached and demanded money. Mike coldcocked him with his fist knocking him to the ground and Mike walked away. The only time something like this happened was when a man pulled a knife on Tim as he was leaving the bank. Tim pulled out his gun and the man fled. Never bring a knife to a gun fight.

Anabal fell out of his bed and broke his elbow yesterday. He will spend 2 nights in the hospital.

The psychiatrist we use for some of the children visited our psychologists today. 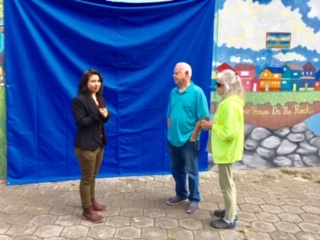 The artist waiting to unveil her artwork

6/1/2000. I spent 2 hours in court as a judge was interviewing 3 new girls who had been abused. Returned home to find the Human Rights personnel there with another abused child. Micro-soft sent us some programs that we can use in our office. Some of our staff took 42 second graders to the zoo.

6/2. I made radio shows. Steve returned but is still ill. There are 70 visitors here from Lafayette, La. and Marietta, Ga. 6/5. Dottie and I worked on the Christmas gifts and some of the visitors wrapped gifts for the children.

6/6. Violence is still rampant in certain areas as the bus fare prices have gone up. In fact, the cost of living has risen across the board but the buses seem to be the main targets. Three bus drivers have been killed this week.

6/7. Pastors Melvin and Mark from Pineville and Cottonport, La. arrived. The land owner on the third piece of property accepted my offer so we will be building an elementary school on this land. Remember I told you that we have 42 2ndgraders and over 200 in elementary alone. Carlos N. is the administrator of the school.

6/11. Melvin is the man whom I call my pastor. Today he ministered the Word to the children. Dottie and I went to the Christmas bodega in the city to sort gifts and actually slept overnight there on the floor.

6/12. One of our visitors lost her purse and with it were her passport, driver’s license, credit cards, etc. So I took her to the US Embassy to try and get her a passport. The team she was with flew out this morning and it will be 7 days before she would eventually be able to leave Guatemala.