Oscar’s graduation was beautiful. I am so proud of him.

It appears that Dottie and I will not be making our annual February trip to the states.

We have only received invitations from one church in Louisiana as well as one church in Wisconsin and one in New York. That distance makes it too expensive to travel. We do not mind driving great distances if there are 2 or 3 churches located within 100 miles or so from one another. So we await your response. 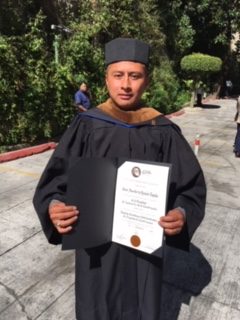 Oscar with his second college degree[/caption]

1996 began with me buying a truckload of sand and when it was delivered the driver ran into our bus. So I will not pay for the sand until they fix my truck.

Our son, Tony, is visiting and he drove the male staff members to Antigua to watch the New Year’s Day football games.

February 5, 1996 the Pope arrived in Guatemala. Over 1,000,000 were in the city to get a glimpse of him. Herb is taking our bunk beds and converting them to triple bunks.

A pastor from Tzanchaj came because 14 men (all fathers) were killed and there were 60 orphans. We will help them get what they need for school as well as vitamins. We went to Potvit where a church we had built just lost their pastor. He died from appendicitis. He left 4 children.

We returned to a special treat. It is our anniversary so the children performed a skit of me proposing to Dottie. Now as everyone knows Dottie was hesitant to marry me. So the kids showed me proposing 4 times. So the fifth time they put a mask on me so she would not know it was me and said, “Yes”.

February 20, 1996 was the day that the Lord would send us 18 month old Minor whom they said was mentally retarded. Dottie and I adopted him and as I write this (2018) Minor is staying in the city attending an IT seminar. He is a college graduate.