A correction! We will need someone from May 11thto June 11thfor Vencedores.

The Md team had a puppet show for the younger dorms. They had pizza for Esperanza down.

A large team from Alabama arrived. 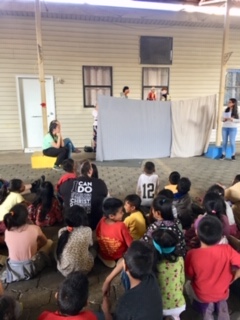 7/8/2000  We drove to Patterson where we had lunch with Pastor Lee & Nell and then ministered at their church, Word of Life, on Sunday. Back in Guatemala Herb is refinishing sinks and commodes. Today was the day that the children held children’s court for the 7-12 year olds. That age group is totaly in awe of the older teens that serve as judges. Carlos took the teachers to lunch. In the evening there was a special hot dog meal for the children.

7/10  Dottie & I ministered at ML & Kathy’s house. It was filled with so many old friends from Alleluia Acre where we ministered for 11 years. Lilian was hospitalized with severe abdominal pain. Surgery revealed scarring tissues and growths between the muscles and peritoneum. They asked if she had been beaten in the past. Remember it was her sister who died when the father hit her in the stomach with all of his force! Ismelda had double hernia surgery today.

7/11 My birthday! We began using Bob’s tractor that he had shipped here to Guatemala. He is pulling stumps on the new property. Gabby had an appendectomy this morning. Sebastian preached in the evening.

7/12. We ministered at Christian Family Worship center in Cottonport with Pastor Mark. I had a high school friend, AJ, who was one of the wildest teens I ever knew. He came to Cottonport to tell me of his salvation. My prayer is that all of my classmates who saw me live an ungodly life would now see what God has done since I came to Jesus.

7/13 Weeks ago I saw workers on the road digging a trench to lay a sewer line. I immediately went to the mayor’s office and asked if we could use the line. He declined saying that it was not crossing the road. As I prepared to leave he said, “If you have $10,000 and your boys will help dig we can put a sewer line on your side of the highway.”  Read tomorrow to see what God did.