I appreciate all of you who are praying for the money for the well. We believe the money will be provided so we will get the new pump tomorrow and begin installation in a couple of days.

The Maryland/Pa team left this morning.

We had a plumbing problem in the dialysis dorm but Felipe and a few of us put our heads together and wore rubber gloves but fixed the problem.

Don and Lizzi had their new bed delivered and Georgie was able to get all of her new furniture delivered yesterday so most of the dorms are set. We received 4 new children so our population is increasing slowly. We received another two more children in the afternoon..

We now have the new gate on the wall that fell months ago. 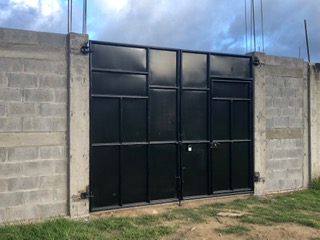 1/17/99. Silvio broke his arm playing soccer. We had to wait 4 hours before he could be operated on. A blind man brought his two children so we took them to court for permission to live here.

1/19. Today would be the first of six armed robberies over the years. The difference was this was down town by the courts where Dottie had taking a child. She ran and the crowd protected her. Silvio had to have a second operation. Also we sent 4 children to have cleft lips repaired. The physicians were from the USA.

1/25 We received 5 new children ages 11 month, 5, 6, 9 and 11 years. We have so many first graders (more than 30) that I hired another teacher. So many children come to Casa who have never been to school thus the large number in first grade.

Two years ago we received a family of 4 with two being African/Guatemalan. A year later the judge sent the latter two to an orphanage in an area where there are many people of African descent. The judge said they did not belong in our home. We fought the courts for a year and was able to get the boy back and he was adopted to the USA. He cried so hard when we were all reunited. Over the years he grew up to be a soldier in the US Army. I am so proud of him. One of his sisters is on staff here at Casa which is November, 2018. He has come to visit us a few times but is doing well in America.