Oseas and Heidy came to visit with Dottie & I yesterday. They were raised here, married, both teaching in the city as well as both studying to be school administrators.

Today was our grandson, Robert’s, birthday so Tony & Lily celebrated it in the village. The baby dorm boys attended. 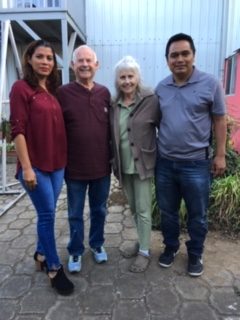 Oseas and Heidy with us[/caption]

One of the most difficult aspects of living in Guatemala is the poverty that is everywhere. A man from our community came to me with a death certificate of his 4 year old daughter. He did not have the $25 to bury her. Of course we paid the fee. I want our community to feel as though they can come to us when they have a need.

I received a call from Veronica’s mother that Veronica’s brother had been arrested. He was standing in a tienda (Small sidewalk store) when someone entered with a gun to rob the place. The police arrested Veronica’s brother as an accomplice. It took a week but we were able to get the charges dropped. Of course a fee was involved.

12-21-98. David and Steve bought a pool table for David’s dorm while Dottie and I bought ping pong tables and hockey tables for three dorms. Christmas is upon us and I believe we are all so tired we just want to get it over with as soon as possible.

12-24-98. Today we gave out the presents. We do that by drawing large squares and assigning a number to each one. The children then find their number and wait until everyone is sitting in their square. Then all you see is wrapping paper flying everywhere.

In the evening we had the Lord’s supper and a time of prayer. Christmas day Dottie and the women served 30 turkeys with all of the trimmings.