Communion last night was special as over a dozen children gave their lives to Jesus. 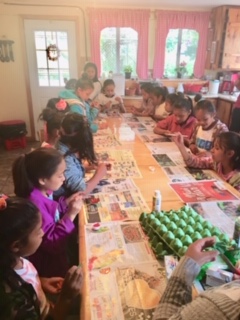 The New Year, 1999, began with a wonderful blessing as Anita led her father to the Lord. Then Jim from Rotary International providing $43,000 to equip the new kitchen.

12th: Dr. Tim and family arrived and he will have a dental clinic all week. On the 16thJerry arrived and will be laying tile in the multi-purpose building. He was able to get a 40 foot container of tile for no cost.

The news announced a gasoline strike was about to begin so we took all of our vehicles and as many gasoline cans to San Lucas and waited in line. Eventually there was still a line of cars 4 hours later. So I believe it was a trick to sell gas as the stations had plenty of gas.

19th: Jerry finished the 8000 square feet of tile. 21st: Today was our first service in the new building. It was so nice and spacious. 22nd: Wayne began at 3am installing the lights in the new kitchen. 27th: All the electrical work is finished.

28th: I went to get my drivers license and when he handed it to me it was good for only one year. I asked why it was not the normal 3 years and he answered, “You didn’t tell me that you wanted it for 3 years.”