The social worker, psychologist, Aroldo and Sebastian took Yusbelly (dialysis) to visit her family in Jutiapa.

The courts called about a 12 year old girl on dialysis they want to send here.

We did receive 2 new children.

Dottie had a Christmas craft time with the little girls. The girl who was ill yesterday returned home. 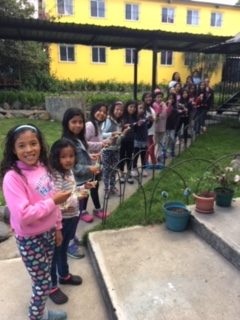 The girls carrying the Christmas decorations they made with Dottie[/caption]

We still do not have water more than an hour so we began at 3am digging up the line. So when we changed that line we had a little more water. Brennen, Steve and I rotate driving about 5 miles where we can pay to have our 500-gallon tanks filled.  It takes 4 trips per day but on March 25ththe owner said that he would give us water free until the crises passes.

April 1998: A woman was caught selling her baby. The police brought us the baby and a few days later when the woman was released from jail she came here asking for her child. Of course we said “no” and informed the authorities.

I filled a 1000-gallon vat with water and we let the children “swim”. Glen called and said the specifications on the new boy’s dorm would house over 50 boys.

The Lord blessed in that the new home for the pastor in Caseria Chuatacal is finished and the family moved in. Also the church in Quice is finished. Dottie and I drove up there to dedicate it.  Driving to Santa Cruz Balanlla I had 3 flats. I put the spare on and another tire went flat. I hitched a ride and bought 3 new tires.

The Catholic Bishop of Guatemala was assassinated April 28th. The newspapers reported that he announced to them 6500 witnesses against the army for 44 massacres, 723 kidnappings, 152 rapes, 10,157 murders, 5616 tortures and 3893 disappearances.