Many years ago we received an 18 month old girl who was so drastically abused by her father that it was over 3b months before she would let any man hold her. No we have a 16 month old boy who will not let any female hold him. That is always the sign of emotional abuse caused by physical or sexual abuse..

On Saturdays I bring the boys from Buen Pastor and Vencedores to the front property so that their house parents can have a break. But today I about froze as it is so cold. I carried the boy I just referred to as he would not let me go.

Ximara who left Casa 8 years ago came to introduce me to her husband and son. She brought me a wedding invitation from Carmella whom you may remember had open heart surgery when she was living in Casa. Ximara said the reason she came today was to thank me for telling her about Jesus because she was saved nd she led her husband to the Lod before they married. Her words humbled me. 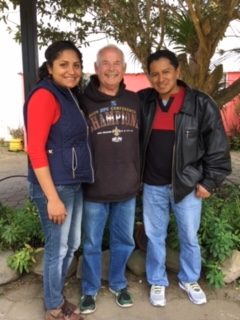 July 1997: Gary, Dan, Janet & Hazel arrived to host a birthday party for all of the children. They bought 250 Burger King meals as well as ice cream & cakes. There was a massacre in in Saloman with 24 killed. It was determined they were soldiers disguised as guerrillas.

12th: The government announced that Guatemala is 4thin the world in kidnappings. 14th: I woke up to 4 inches of water in the girl’s dorm. I went to work and eventually discovered one shower had a roll of toilet paper in the line.

August 4, 1997. There were 3 teams here with over 60 men who have been working on the girl’s dorm. Incredibly at 4am 40 of our children got up to tell them goodbye. Dr. Ellis from the University of Missouri came to plan on sending medical interns to help us. 17th: Remember Maria the 20 year old with degenerative arthritis who was sent to Indiana for treatment? She returned & her condition is great. Pain free!

26th: Pastor Claudio in Tzanchaj has 90 orphans and needs help.

November 4, 1997. The government announced that 90% of kidnappers are exsoldiers.  6th: The Family Life team hit the ground running and we should be able to move the girls into their new dorm. 10th: Gloria’s future in laws came to formally ask for her had in marriage. 14th: The girls moved into their new dorm.#175